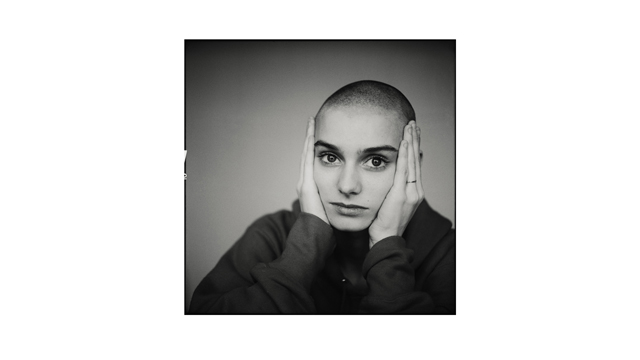 Without any fear of feeling repetitive, this succinct passage eloquently translates that the portrait is born at that very moment. The serene synergy of the eye, choice of film, light and most importantly the connection between the author and the sitter, gives birth to that very particular alchemy of it nestling within the grain of the film. No technique is required to bring it all to light. It’s all there waiting to be printed with complete dedication to that very special connection to its author. That takes time, unlike the moment of time it is captured.

I hadn’t met Sinéad before. Her face was lively and expressive, completely captivating, with an indefinable air that encompassed innocence, experience, intensity and something feral. We drank a cup of tea and talked for a while in the kitchen, and then moved to the bedroom where there was a huge bay window with perfect daylight. I had set up a backdrop and we sat either side of the table – a two inch thick slab of bullet-proof glass on trestles. I gradually shot four rolls of 120 film – 48 frames – with my Rolleiflex while we continued our conversation. It’s a gentle camera that is almost silent. It has an easy presence and doesn’t intimidate the sitter in the way many cameras do. It was perfect for the light, the moment, and the mood.

When I processed the film, I was struck by the energy and atmosphere in every picture. Each was dramatically different, and showed the openness that is the ideal for a portrait. I have returned to the contact sheets many times over many years, and continue to be fascinated by every frame. The National Portrait Gallery bought two of the pictures for their collection shortly after the shoot; highly unusual for such a young subject – Sinéad was around 22 at the time and they usually won’t acquire a picture unless it is of someone who has had a long and significant career.

While a good portrait can describe eloquently what the photographer saw in the person they photographed at that moment, it can also transmit a deeper level of understanding. Indeed you can also continue to learn from it for many years. You can revisit it, study it, reposition it in the context of a wider story. A portrait, in particular one shot on film, has a permanent connection to a precise moment in time. It can provide a window of clarity on a period that may have been coloured by years of subsequent history, editing and fiction.

“What is there more fugitive and transitory than the expression on a human face? The first impression given by a particular face is often the right one; but the photographer should try always to substantiate the first impression by “living” with the person concerned. The decisive moment and psychology, no less than the camera position, are the principle factors in the making of a good portrait.”

Thomas Carlyle noted that he ”…found a portrait superior in real instruction to half a dozen written biographies…I have found that the portrait was a small lighted candle, by which the biographies could for the first time be read.”